Rafael Canada (Rafael Alfandary) was a Toronto Canada based jewelry designer in the 1970's.  The major bulk of his work spanned from about 1969/70-1978, creating somewhere around 500,000 pieces in this short time.  He closed the doors on his shop in about 1978 due to a business deal gone sour, a major jewelry company pulled an order already in production which Rafael was not able to recover from.
Please check out my Etsy store LuckyPatina for many examples of his work.

Three Distinct Hallmarks that can help to identify the age of a piece.

The earliest of his Hallmarks was from about 1970-72, was simply him scratching his name into the back of a piece.  The Hand Signed versions are some of the most rare and desirable.  Often the designs of these pieces tend to be simple, often incorporating his most unusual glass stones.  (such as the "water color paint" glass stones and raised ones)  There are some later Hand Signed examples of his work, perhaps they were custom pieces made by Rafael himself instead of his Team.

From about 1972-74 Rafael used the hallmark "Hand Crafted by Rafael Canada".   During this period Rafael had become more confident in his work and abilities.  Many pieces from this time are often more experimental, from  unusual stones to unique shapes.  During this period he designed many of his popular and top selling designs.  This hallmark later became obsolete because it was too "wordy" and did not fit well on some of his pieces.

1974-78 Rafael used the "Rafael Canada" script hallmark.  This hallmark was much shorter than the previous one, also the use of script font made his brand look fancier and higher-end.  During this period Rafael had a fairly large catalog  of work, branching into Sterling Silver, Gold, Brass, Gold Plate, and Silver Plate.  He had also started branching into Housewares such as Planters, Ceiling Pendants, Mirrors, Sculptures, Clocks, etc.

Posted by Rados Griffin at 4:12 pm No comments:

I often consider my home to be rustic, eclectic and full of Canadiana.  Here are a few pictures from around my home. 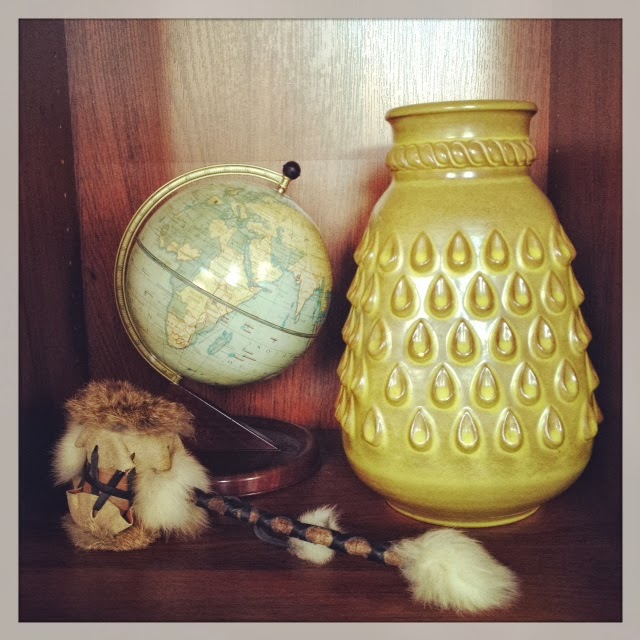 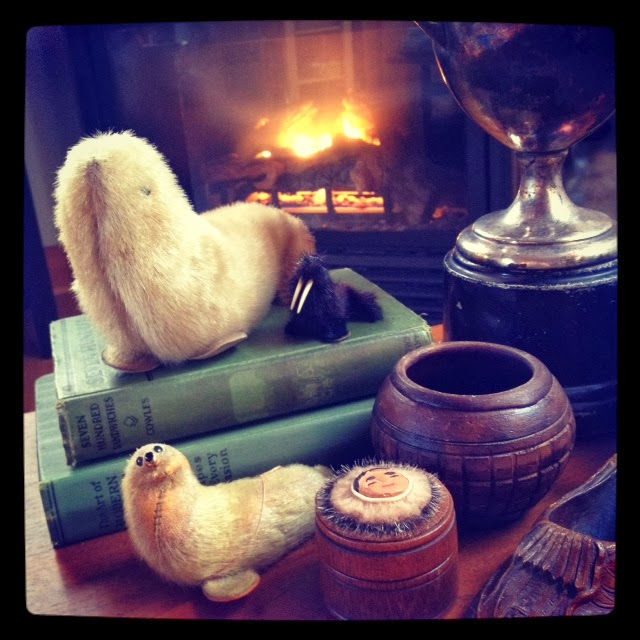 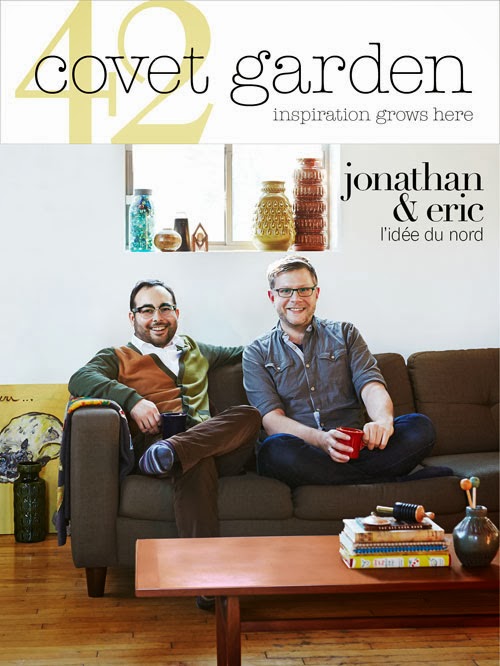 A few months ago, my Partner and I were approached to be in Covet Garden Magazine.  It was a great experience having the Covet Garden team in our home for a day.  I also like the idea of having a visual record of our life at that moment in time, after all us Canadian are nostalgic beasts.    (see if you can spot Bruce the Sloth somewhere in our home)
Check out our issue #42 at http://issuu.com/covetgarden/docs/issue42

Posted by Rados Griffin at 1:08 pm No comments: 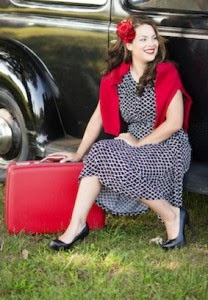 The Gadsden’s Toronto Vintage Clothing Show Spring 2014 is almost here, a little less then 2 months away.  LuckyPatina Vintage was recently featured on their "Meet the top 30 Dealers" page with other great Vintage Dealers such as Scandimania and Samantha Howard Vintage.  One thing I can assure you about this show is the variety and outstanding caliber of the vintage jewelry that will be there.
March 30th cannot come quick enough!

Posted by Rados Griffin at 4:34 pm No comments:

Empty Ring Box and my Grandmother

Over the past years, my Grandmother has given me many treasures from furniture to jewelry.  Recently she gave me a little ring box that sparked my interest.  There was no ring in the box but a little story that came with it was far more touching.
Sometime in the 1940's my Grandmother was walking home from her job and noticed a ring in the window of Ciro Jewelry store.  Ciro was a higher end costume jewelry store in London.  She enquired about the ring and it was far too expensive for her.  Over the next year she saved until she had enough to purchase the ring.  She knew it was splurging to buy it, but after years of rationing and being frugal because of the war effort.....she needed to have some beauty and a little frivolous purchase to remind her she was in her 20's.
The little ring box represents my Grandmother to me, her strength and determination.  It also gives me an insight on her journey through life, her work ethic and love of all beautiful things.  Her house was broken into many years ago and the ring was taken, but the story and this little ring box still remain.
My Grandmother Betty turned 92 in November and enjoys playing on her Mac laptop, listening to the CBC and doing puzzles. 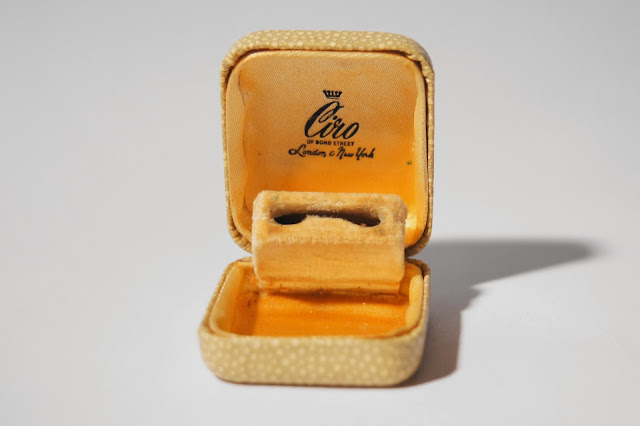 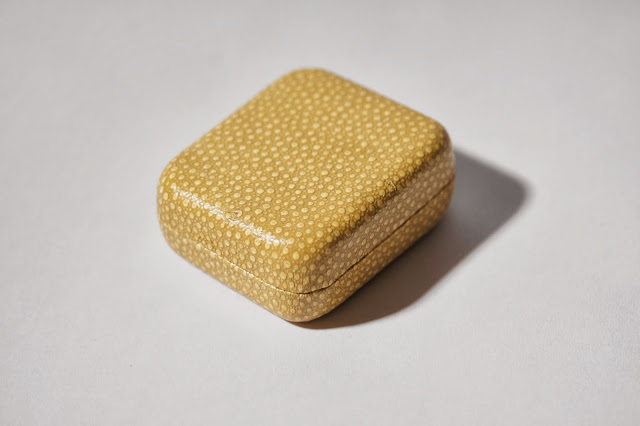 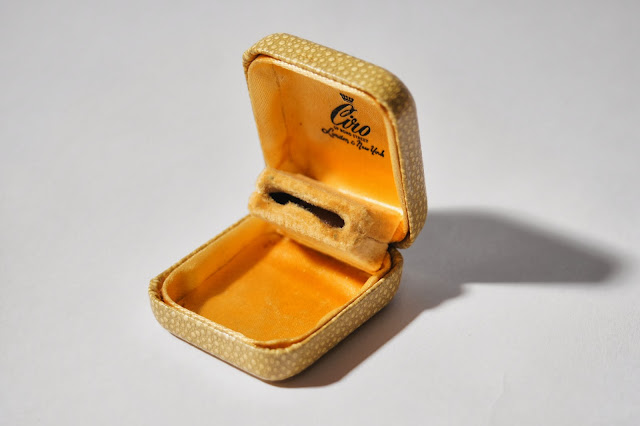 Posted by Rados Griffin at 1:04 pm No comments:

For the past two years I have bought a Lucky 2013-14 Hoop Embroidery from a shop on Etsy called HoopsyDaisies.  This shop is based out of Athens, Greece and has wonderful paper garlands and embroidery hoop art.
My Lucky 2013 Hoop brought a lot of change in our home for my Partner and myself; change of jobs, rediscovery of our passions, new friends, and a lot of personal growth.  If the Lucky 2014 is anything similar to its predecessor, this should be another great year.
Currently my Lucky 2013-14 hoops are in a shadow box hung on my world famous frame wall (well famous with our friends).

Posted by Rados Griffin at 7:57 am No comments:

Rados Griffin
Toronto, Ontario, Canada
A collection of jewelry and a love of research created my passion project of Rados Griffin Collection. Specializing in Canadian, Scandinavian and American vintage jewelry.